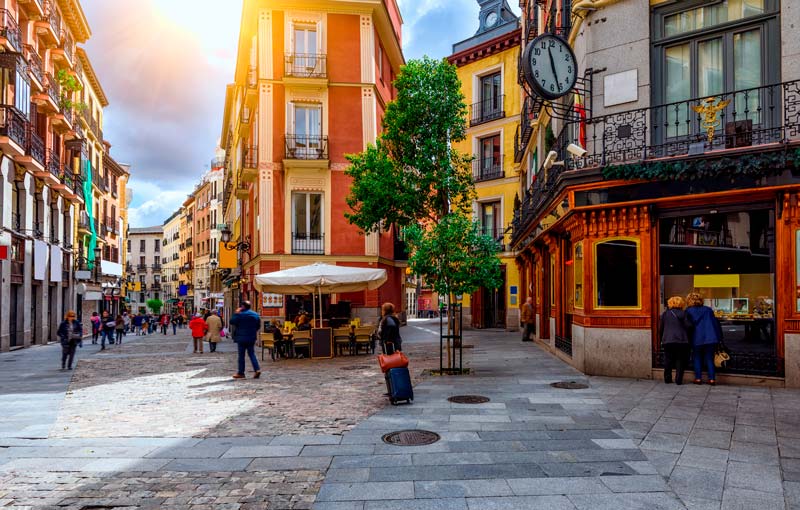 Spain is a land of contrasts even though it is not a big country. Its different climates, landscapes and customs change both in the various inland areas and on the different coastlines.

Nevertheless, all its territory shares a common history of more than 500 years and the Spanish language, the world’s second-most spoken language. The country is influenced by the fact that, for hundreds of years, it was an empire on which the sun never set.

In the last 40 years, Spain’s development has been shaped by the stability of a modern democracy under the umbrella of a parliamentary monarchy. All of this provided the country with extraordinary stability at the end of the 20th century, economic growth and improved social wellbeing, which the Europeans called “the Spanish miracle”.

Diverse cultures, cuisines and customs in cities with a high level of safety and wellbeing

The regions of Castilla-León, Navarra, Aragón, Madrid and Castilla-La Mancha are located in central Spain.

Cities like Zaragoza, Madrid and Toledo share common features such as their major historical importance, an extraordinary cultural heritage, good industrial, agricultural and/or livestock development, and an excellent supply of quality public and private services.

In terms of services, we must highlight the quality of Spain’s public healthcare system (one of the best in the world), its security forces (police force, fire brigade and civil protection) and its excellent educational offering, where some schools and universities are on a par with the best in the world.

In addition, Spain has an attractive variety of cuisines, with well-prepared autochthonous products, and a broad spectrum of sports; people either play them or enjoy spectacular football and basketball teams which compete in the major continental competitions.

Zaragoza, which is currently Spain’s fifth-largest city in terms of inhabitants, has played significant roles in the country’s history in its over 2,000 years.

Madrid, whose history was shaped when the royal court established it as the kingdom’s capital in 1561, is the country’s economic, political, cultural and financial centre.

Toledo, which was declared a World Heritage Centre by UNESCO in 1986, is known as the city of three cultures and religions (Jews, Muslims and Christians).

Life in those cities is as safe and friendly as it is exciting and full of opportunities.

What is it like for young teenage students? It is clearly a very beneficial and unforgettable experience. It is beneficial because studying at one of the best schools in Spain, learning the language of Cervantes and of hundreds of millions of people from around the world is an enormous privilege. It is also unforgettable because young people and Spanish society are full of life, they are very open and this generates lasting personal relationships, enriching the students’ personal life and helping them to maintain the level of Spanish acquired.

Both in Toledo and Zaragoza, and of course in Madrid, the educational offering, either with international curricula or with the full Spanish education system, is varied and of high quality.

This provides students with the possibility of having an educational experience in the heart of a country with excellent communication networks, enabling them to easily move around to find out more about the geography, history and customs of one of the world’s healthiest countries.

According to a study published by the Institute for Health Metrics and Evaluation in Seattle, people in Spain are predicted to have the longest life expectancy by 2040, with an average lifespan of 85.8 years.

There are not many other wise options when seeking full and comprehensive education for young people such as giving them the experience of learning or improving their Spanish, enabling them to visit the country’s most interesting places and studying at one of the prestigious BSS centres (Best Schools in Spain).