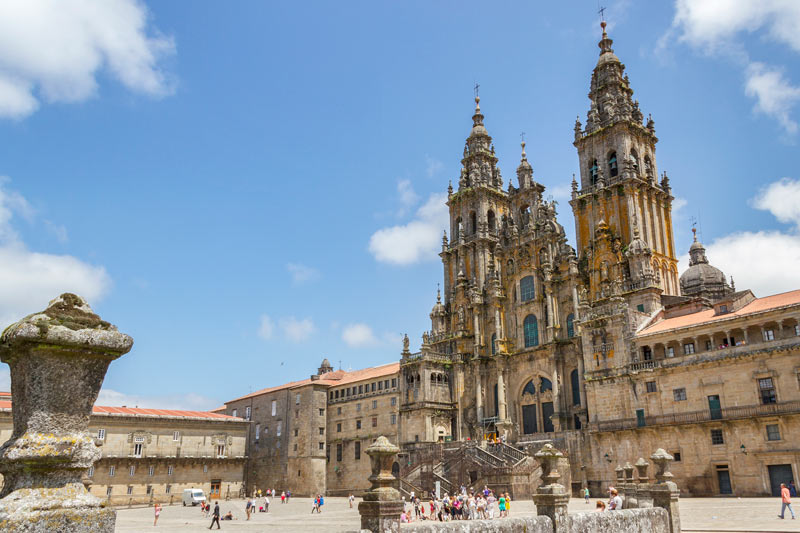 Galicia is one of the world’s most famous Spanish regions thanks to the Way of St James (or the Camino), a religious pilgrimage path trodden by millions of people from all continents, where, at the end of the journey, they worship Saint James the Apostle, whose remains, according to ancient texts, are located in Santiago de Compostela, the capital city of Galicia.

Although the Way of St James had a religious origin, increasingly more people of all beliefs walk along it, enjoying wonderful landscapes, a culture which has kept its origins alive and stayed true to them, and a cuisine based on natural products, whose reputation transcends borders.

Tradition and modernity go hand in hand in Galicia, where the major cities concentrate internationally renowned companies and brands.

The multinational clothing and accessories retailer Zara is based in A Coruña; its clothes are present in wardrobes around the world. The PSA Peugeot-Citroën Group has a car plant in Vigo, with a production capacity of half a million vehicles per year.

Along the Galician coastline, there are large shipyards which build oil tankers, and military and civil vessels for the main naval powers.

It has a mild and temperate climate, with no major temperature fluctuations between winter and summer, although there is a difference between the coastal areas and the inland areas, where lower temperatures are more common, especially in the mountain areas; skiing can be done at the Cabeza de Manzaneda mountain resort.

Rainfall is frequent in autumn and winter. Thousands of Spanish and foreign tourists are attracted to its beaches in the summer, captivated by its climate and its cared-for sandy beaches. In fact, Galicia was the Spanish region with the second largest amount of Blue Flags in 2018 along its coastline.

Galicia has an intense and dynamic cultural life, especially in the major cities, where most of the population is concentrated. Throughout the year, numerous concerts are held and theatre companies perform their shows in the region’s theatres.

Competitive and amateur sports form part of the daily lives of young people. Football is the main sport and people of all ages attend the stadiums every weekend to cheer on the two major Galician teams: C.F. Celta de Vigo, which is in the First Division, and Deportivo de A Coruña, which is in the Second Division this year.

Galicia also has a rich cultural and ethnographic history as a result of the diverse peoples who have settled on that land throughout history and have left their mark on various works. Four of them have been distinguished by Unesco as a World Heritage Site: the old town of Santiago and its cathedral, the Way of St James, the Roman walls of Lugo and the Tower of Hercules in A Coruña. The cathedral was built more than eight centuries ago and, together with the old town of Santiago, forms one of the most beautiful examples of civil and religious architecture in Europe. The Tower of Hercules was part of a large chain of lighthouses which also included the Pharos of Alexandria (Egypt) and the Colossus of Rhodes (Greece). The walls of Lugo are a defensive structure built by the Romans over seventeen centuries ago around which people can walk.

Lastly, Galicia is one of the most famous Spanish regions because of its cuisine; this recognition is due to the quality of its products, which are still prepared in a traditional way, thanks to a numerous rural population devoted to its traditions and who continues to think in terms of quality rather than quantity.

Food festivals are an example of the quality of its products and are more frequent in the summer months. The most well-known ones are the festivals devoted to the octopus, Padrón peppers, barnacles, pork shoulder, mussels, large empanada pies, etc. as well as the wine festivals.

Galicia has five wine appellations; the most well-known one is Albariño, which is famous for its excellent white and fruity wines.